Pay Related Social Insurance (PRSI) is a compulsory deduction from earnings which is payable to the Department of Social Protection (DSP) towards the Social Insurance fund of the state which is used to fund social insurance payments in the state. Each periodical contribution creates an employee's record of aggregate contributions which will in turn dictate the level of benefits available to that employee when applicable. The amount of PRSI you pay will depend on your earnings and the class you are insured under.

Social insurance contributions are divided into different categories, known as classes or rates of contribution. The nature of employment mainly determines the PRSI contribution class that applies to the employee. PRSI Class A applies to the majority of employees in the private sector and to employees recruited in the public sector since 6 April 1995.


The type of class and rate of contribution you pay is determined by the nature of your work. Most employees pay Class A PRSI. This class of contribution may entitle employees to the full range of social insurance payments that are available from the Department of Social Protection, if you meet the qualifying criteria.

Each PRSI contribution made in a pay week equates to a week of insurable employment.

PRSI is always deducted on a Week One/Month One basis.

The current weekly threshold for employee PRSI is €352. 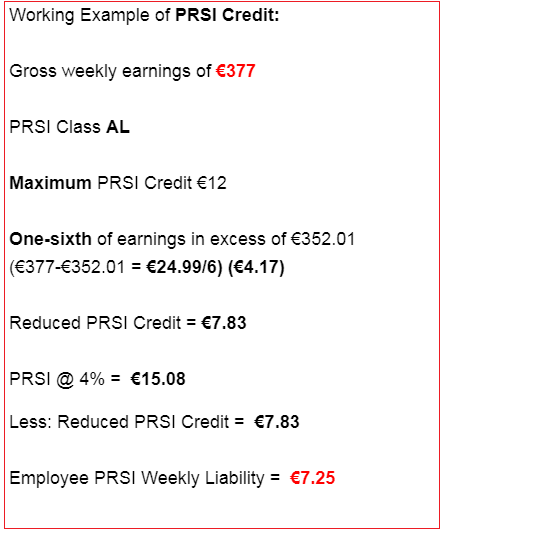 PRSI is detailed separately on each payslip.

Employers should remit all PRSI collected to the Collector General at the same time and in the same manner as the deductions under the PAYE system, Revenue will issue a monthly statement to employers.

Class A applies to people in industrial, commercial and service-type employment under a contract of service and civil and public servants recruited since 6 April 1995, whose combined reckonable earnings from all employments bring them into Class A. The appropriate subclass within Class A is based on the earnings in each separate employment.

Class J applies to the following groups of people:

Contribution Classes B, C and D

Class B, C and D apply to pensionable employees in the civil and public service, including civil servants, teachers, Gardaí, the army and local authority employees who were recruited before 6 April 1995.

Class H applies to NCOs and enlisted personnel of the defence forces.

Up to the end of 2010, Class K covered people receiving income that was not subject to Social Insurance Contributions but which was liable for the Health Contribution. Income included, occupational pensions and income of people aged 66 or over previously liable for Class S.

In 2010 and prior years a Director in Class S should automatically go to Class K when they reach 66. Since 2011 a Director who contributes under Class S reaches 66 should thereafter change to a Class M contributor.

Class S applies to self-employed contributors who pay tax and PRSI under the self-assessment system (Schedule D).
Directors whose income is assessable under Schedule E tax may also be liable to pay Class S.

When a Class S contributing employee reaches the age of 66 Class M should be applied to earnings thereafter.

For clarification on the Class of PRSI for specific company directors you should contact Scope Section of the Department of Social Protection.

For 2022, the minimum annual PRSI contribution for people with annual self-employed income over €5,000 is €500.

At Bright, we’ve been working hard to improve the customer experience and make it easier to renew your Payroll Manager licence each year. With this goal in mind, we recently changed how software licences are purchased.

Going forward, you will need a Bright ID to purchase Payroll Manager. If you are a Thesaurus Connect user, you already have a Bright ID – just use the same email address and password that you use for Connect.

Check out our video tutorial or help documentation which takes you through the ordering process step-by-step. If you have any difficulties, or have typically paid for your Payroll Manager licence by cheque or other means, please contact billing@brightsg.com.