USC operates in the same manner as PAYE, varying by employee:

EMPLOYERS ARE TO OPERATE USC STRICTLY ON THE EMPLOYEE ASSIGNED USC RATES AND CUT-OFF POINTS AS ADVISED BY REVENUE IN THE P2C FILE, WITHOUT EXCEPTION.

The Forms P45 and P45 Supplement include USC details.

Individuals aged 70 and over whose aggregate income is less than €60,000

Individuals who hold full medical cards whose aggregate income is less than €60,000

It is NOT the responsibility of the employer to determine amendments to the operation of USC based on an employee’s personal circumstances.  Where lower rates of USC apply in certain circumstances, for example, in the case of employees aged 70 and over whose aggregate income is less than €60,000, or where employees hold full medical cards whose aggregate income is less that €60,000, these lower rates will be stated on the P2C issued by Revenue. Where lower rates are not stated on the P2C file currently held, the employee should be advised to contact their local Revenue office in order to update their USC status with Revenue.

The 2017 USC exemption income threshold is €13,000.
Where Revenue determines that a USC exemption applies, it will be advised to the employer on the P2C file. The employer does not make any adjustment unless advised to do so via the P2C/Tax Credit Certificate issued to them for an employee.

What are employers to do where they have not received 2017 P2Cs in time to run January 2017 payroll(s)?

The rates and some thresholds of the Universal Social Charge (USC) are changed with effect from 1 January 2017.  In December 2016, Revenue issue to employers/pension providers 2017 Tax Credit Certificates (P2Cs) for all employees, advising the rates and thresholds applicable from 1st January 2017.
In the situation where an employer has not received 2017 P2Cs in time to run January/February 2017 payroll(s), the following instructions should apply:
Tax Deductions:
Employers should continue to use the 2016 P2Cs for tax deductions.
USC Deductions:
Employers should continue to use the 2016 USC Cut-Off Points and apply the 2017 USC Rates (1.5%, 2.5%, 5% & 8%) 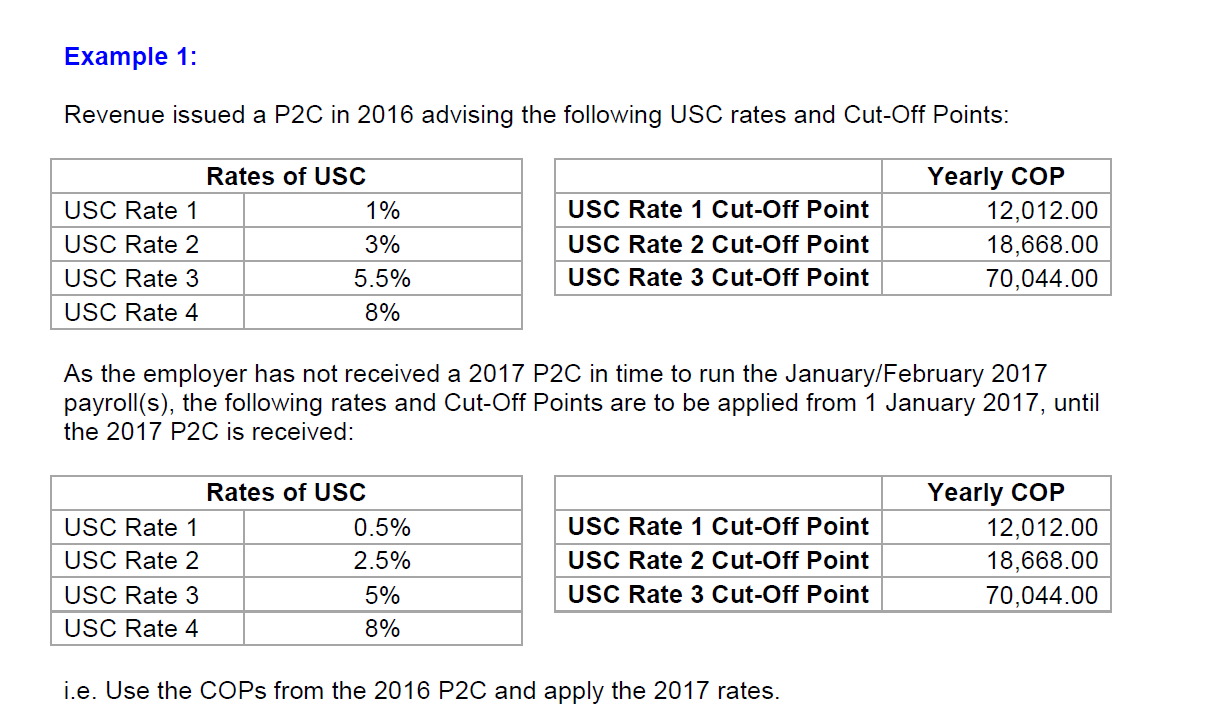 Thesaurus Payroll Manager will automatically apply the above 2017 rules on import from 2016 as appropriate.

Thesaurus Payroll Manager will automatically apply the above 2017 rules on import from 2016 as appropriate.

It is imperative that once 2017 P2C files are received by an employer that they are imported to 2017 Thesaurus Payroll Manager immediately and before any further payroll is updated.

When a new employee starts in your employment and provides you with a 2016 P45 with standard rates, employers should continue to use the 2016 COPs and apply the 2017 rates on the temporary basis. They are to be used on a week 1/month 1 basis until advised otherwise by Revenue on the P2C file.
The Revenue screen facilitates the recording of the additional USC information from the P45.  (This section should only be completed when the P45 is for the current tax year)